During NYFW Michael Kors personally requested a powdered finish with nude so that the nails didn’t clash with the clothing. Manicurist Jin Soon painted the models nails for the Spring/Summer 2015 collection with Michael Kors Nail Lacquer in Hint and topped it off with a matte finish to give the powder effect.

The 2015 collection had effortless yet put-together looks such as crop tops, three-quarter length skirts, American traditional trousers, fresh whites, florals, pops of color with gingham and plaid, and lots of tan leather in the details such as the buckles, satchels and corsage belts. It had an American romanticism about it, like a woman you would fall in love with while watching her picnic in a park out of a sweet wicker basket. Some of the looks such as the trench and crop dress had a bit more edge and confidence still holding the same sweet personality but with some sass. The type of woman that you don’t want to mistake her kindness for weakness because she can make you regret it in a heartbeat. I enjoyed the mixture of ultra-feminine pieces mixed with a bit of masculinity.

The Michael Kors Fall Nail Collection has 18 shades that consist of frosted nudes, strong jewel tones and unexpected pop of color. The formula is free of Formaldehyde, Toluene and DBP making it friendly for your tips. Kors is teaming up and interacting with bloggers and fans by encouraging you to share your Kors manicure using the hashtage #NailedIt on Instagram and Twitter.

Inspired by the pieces from Fashion Week I came up with four nail looks that I feel embody Kors’s style. Using the ever-so-popular French Tip which I feel plays so well on the American styles in the collection (Did you know the French Manicure is actually not French? It was created by American Jeff Pink, founder of Orly. Click HERE to find out why it was dubbed the French Tip) I remade the traditional French manicure with art. Read on for my four French Kors looks.

I drew inspiration from the structure of the trench by creating a nail that I felt mimicked the shape and lines in the jacket. I created a story pulling inspiration from the denim with the lacquer Impulse, Spotlight and Coquette fill the nail and finished with a soft metallic tip in Posh to mimic the hardware in the coat. Tans like the lacquer Coquette are a reoccurring theme in the collections accessories and created a flattering contrast. This woman breaks the rules to “feminine” fashion and isn’t afraid to play with shapes in silhouette and her nails. 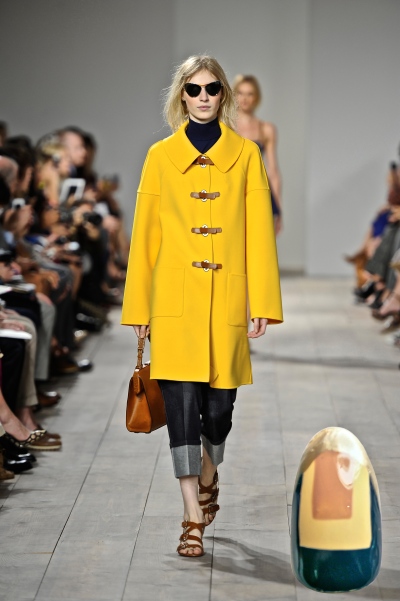 Kors lacquer in Ingénue covers this nail with hand painted gingham print  in Femme Fatale. Delicate gold sequin meet the center of the crossing lines while Audition tops off the nail at the tip to add an unexpected pop of color much like Kors collection.

Pulling inspiration from the play of color contract from the orchid to indigo in the gown, I created a monochromatic stack of color using Michael Kors lacquer in Coquette, Cabaret, Rendezvous and finishing this stacked french with Femme Fatale. Coquette, the sandy nude lacquer was used in the lunar part of the nail near the cuticle to compliment the camel colored sandals in the outfit. The woman that wears this manicure  likes to dress in feminine pieces while also giving off the message she’s an independent woman.

Mums, inspired by Kors netted floral skirt, lay near the cuticle of this nail accented with tiny gold sequins. The mums were created using Spotlight and Audition, while Fantasy fills the rest of the nail. Use Charmed and Thrill to create leaves for the flowers with a dotting technique. Tip it off with Posh for the final French touch. These nails were created for the shy and sweet girl that appreciates soft details and lives for romance. 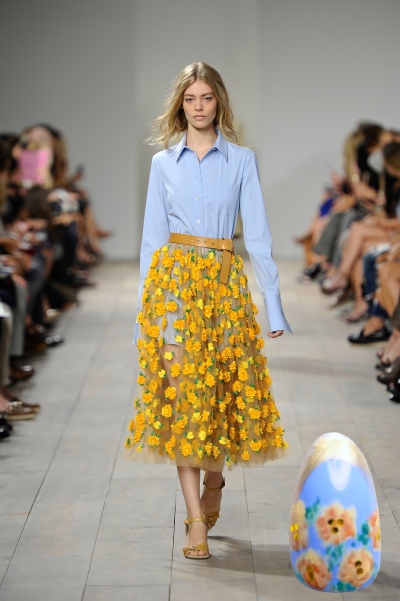 ← #TipsyLove at Beauty Bar Chicago TONIGHT!
Nails From The Crypt →